The Cyclone Hydraulic Reservoir represents new thinking in the way that reservoirs are designed and configured for both mobile and industrial applications. This modern design significantly reduces the amount of weight, space, and oil required in a hydraulic system. 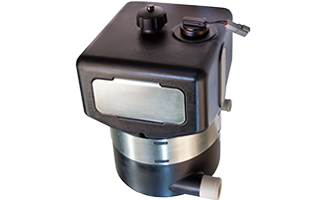 Hydraulic systems are one of the oldest technologies. It is all around us; from the garbage truck in your neighborhood, the amusement rides at the local festival, to the construction equipment you see working on highways. The lifeblood of a hydraulic system is oil and conventional wisdom has these machines carrying a significant amount of it, until now. Cyclone Hydraulics is changing the way we design, configure and use hydraulic oil reservoirs.

A Major Function Of A Hydraulic Reservoir Is To Remove Air

Conventional reservoirs do not remove a majority of air from the hydraulic system. Traditional hydraulic systems do not allow sufficient time to remove entrained air which is a major cause of hydraulic component failure.

Utilization of the Cyclone reservoir RAPIDLY removes a majority of air from the oil.

A traditional hydraulic reservoir should contain 1 to 5 times the amount of oil that the pump can produce in one minute. A 20 gallon per minute (GPM) system may need 20-100 gallons of oil and weigh 250-1200 pounds (including oil) and require a significant space claim.

A Cyclone Hydraulic Reservoir can reduce the amount of oil necessary in a hydraulic system by 10-20 times! A 20 GPM system will may only need 2 gallons of oil and weigh as little as 30 pounds (including oil) with minimum space claim.